Qi-certified wireless charging devices are now commonplace in the consumer market. But how exactly does Qi achieve wireless power transfer at the circuit level?

Qi is a wireless power transfer standard developed by the Wireless Power Consortium that specifies an interoperable solution for inductive charging over distances of up to 4 cm.
The Qi standard specifies several key features such as operating frequency, coil configuration, minimum system efficiency, power control methods, and communications protocols.
For safe wireless power delivery, careful attention should be paid to several design challenges such as efficiency, reliable communication, foreign object detection (FOD), thermal considerations, and over-voltage/over-current protection. In this article, we’ll take a look at a few basic concepts of the Qi standard.

Block Diagram of a Qi-Compliant Charger

The block diagram of an inductively-coupled wireless power delivery system is shown below: 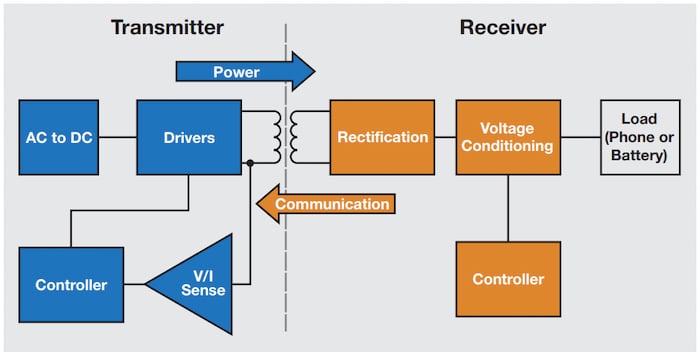 Before power delivery can be performed, several different phases should be completed. Below, we’ll briefly review different steps of the Qi-compliant charging algorithm.

During standby mode, the transmitter is in the idle state and no appreciable power is output. The transmitter uses “analog pings” to detect the presence of any potential power receiver. Analog pinging is achieved by applying periodic test pulses to the primary coil.

Hence, the voltage that appears across the primary during analog pinging can be used to detect the presence of a potential power receiver. Note that some Qi-compliant power transmitters do not use analog pings and rely only on digital pings to detect a power receiver.

After the transmitter detects a potential power receiver in proximity, it uses “digital pings” to communicate with the receiver. Digital pings are longer pulses compared to analog pings and have sufficient energy to activate the power receiver (if one is present). 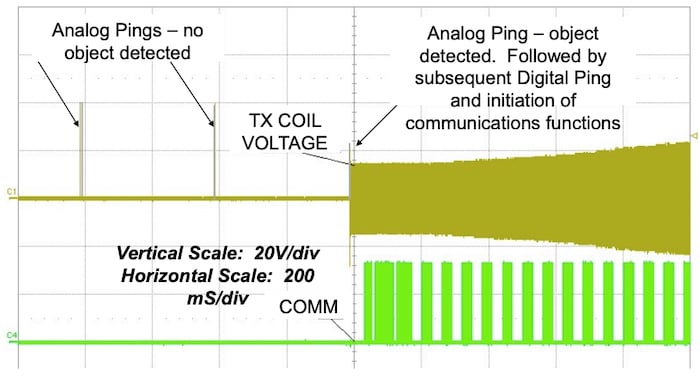 Analog and digital pings at startup

With a valid signal strength packet, the transmitter will maintain power to the coil and proceed to the next phase: the identification and configuration phase.

In the identification and configuration phase, the power receiver sends the transmitter data packets that contain information about the Qi version of the receiver, the maximum required output power, and other configuration information.

Transmitting a large amount of power to a metal object can increase its temperature and cause hazardous situations. That’s why the transmitter will stop supplying power if a foreign metal object is present.

How Does the Transmitter Adjust the Power level?

A typical power transfer function from the LC circuit of the transmitter to the rectifier output of the receiver is shown below. 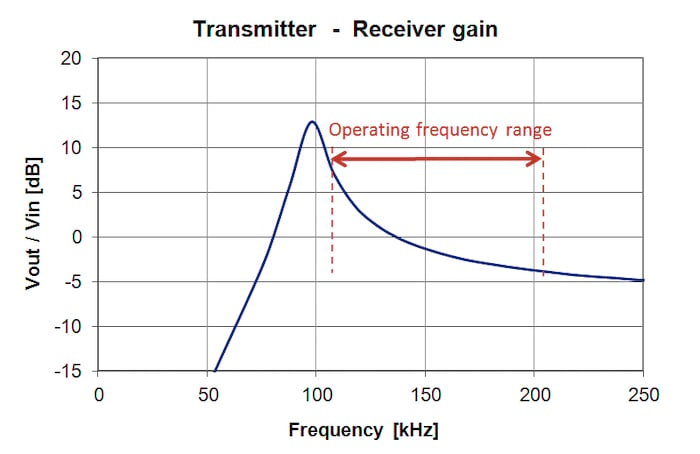 Graph of a Tx-Rx transfer curve

How Does the Receiver Communicate With the Transmitter?

The magnetic coupling is used for both power delivery and communication purposes. Interestingly, this can be achieved by changing the receiver side load. This RX coil modulation will reflect back to the TX side and allow us to send data packets from the receiver to the transmitter. Capacitive modulation of the RX coil is illustrated below.

The architecture of a 5 W wireless power transfer

With the Qi standard, both capacitive and resistive modulations of the RX coil are supported.

Source: All About Circuits

Do you have hands-on design experience with Qi wireless charging technology? What benefits and challenges have you faced with it? Please share your thoughts in the comments below.

How to add wireless phone charging to your car?
April 4, 2021